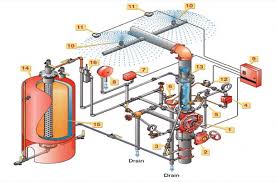 There are two variants of Water Spray System, for Fire Protection:

HVWS is generally used in oil based systems, having high flash points. The velocity of the water sprays, hitting the system under fire is critical for successful fire extinguishing action.

Water spray System are installed to control fire & to provide cooling &/or exposure protection to such risks where extinguisher is always not possible or even desirable e.g. fire involving flammable fluids.

In case of fire the Quartzoid Bulb sprinkler shall burst at rated temperature due to heat which allow water in the detection pipe to drain out and in process allow the Deluge valve to open fully. As soon as the Deluge valve opens the water shall flow through the piping to flow water to all water spray nozzles mounted on the piping around the transformer. The water shall be sprayed in Hollow conical spray pattern to cover entire area of the transformer so that the fire on the transformer shall cool due to emulsification as well as fire get extinguish due to cutting off oxygen due to coverage pattern of the nozzle.

The fire shall be control and extinguished with the help of the H. V. water spray system.

The indication of operation of the system shall be available on the control panel with Alarming Siren.

For Enquiry of Deluge Fire Sprinkler System:- Contact us